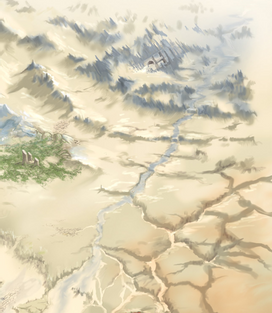 The Skrall River was a river flowing south from the Black Spike Mountains all the way to the city of Atero. It was only water for a short span at its start. Fed by melting snows from the mountains, the water ran over the Dark Falls and down into the desert, only to be evaporated by the incredible heat. By the time the river reached the land of the bone hunters, it was nothing but sand.1

The Skrall River ran from the northeastern reaches of the Black Spike Mountains to the Sea of Liquid Sand to the southwest of the desert of Bara Magna. It passed through the eastern part of the Black Spike Mountains and over the Dark Falls on their southern border. From there it flowed through bone hunter territory and eventually reached Atero and Arena Magna, with Creep Canyon on its eastern side. It widened as it emptied between Tajun and Vulcanus into the southern Sea of Liquid Sand.2, 3

The headwaters of the Skrall River were not far from Roxtus.4

As of story year 2009, the Skrall River was mainly flowing sand, not water, where it flowed around Arena Magna.5