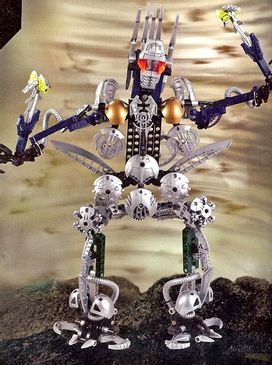 Subterranean was a mutated Onu-Matoran from Metru Nui who later became a Dark Hunter.1, 2 He was capable of disassembling objects with a touch and immobilizing enemies with a glance. He wore armor designed to deaden sound, as his hearing was painfully acute.2

Subterranean, as he was code-named, was originally an Onu-Matoran on Metru Nui. He was mutated into a bizarre and frightening figure. Since joining the Dark Hunters, he proved to be a most effective hunter of Toa. His accident had the side-effect of making his hearing so acute that the slightest noise was painful to him. He was fitted with special armor that dampened sound. Naturally, Subterranean avoided Toa of Sonics as much as possible. Subterranean was capable of disassembling any object with just a touch, making him an excellent saboteur. He was able to immobilize enemies temporarily with a glance.3

As of story year 2006, the Shadowed One dispatched Subterranean to meet with a tribe of Frostelus to discuss an alliance, believing that Subterranean's ugly appearance would put them at ease.3