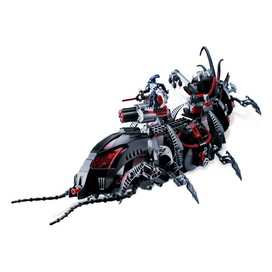 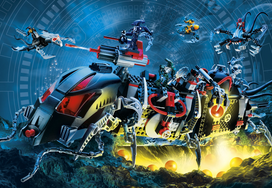 The Barraki attacked Mahri Nui with mutant hybrids of Takea sharks and manta rays, but the Toa were ready with the Toa Terrain Crawler, a mix of creature and machine given to them by their ally, Axonn. It had a maximum submerged speed of 40 knots (74 km per hour). Its shell was 60 centimeters thick. It could hold six passengers inside and one mounted on its blaster. Its natural tools were claws and antennae. Its weapon was a Cordak blaster. Strange chemicals in the Terrain Crawler's system automatically healed it of any damage. Its interior could be opened to launch air spheres, and its rear hatch opened to release a sea sled. The spider crab was the only sea creature feared by the Terrain Crawler.1