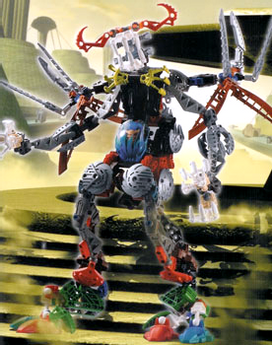 Vahki hunters were massive Rahi which seemed to have a particular hatred for machinery. They were known to use their claws and teeth to demolish Vahki, fire drones, and other mechanical creations. They were once confined to Po-Metru and Ta-Metru, but later they spread out all over Metru Nui. They spent most of their time underground, emerging only to strike before returning to the safety of their tunnels.1

Vahki hunters were so named for their tendency to prey on Vahki, a tendency which some in Metru Nui hailed and others hated. In truth, Vahki hunters sought out not only Vahki but also other artificial and mechanical creations, such as Ta-Metru fire drones or industrial machinery. They could reduce Vahki to scrap metal with their claws and teeth. They were massive Rahi and also had wings.2

A small number of Vahki hunters escaped from the Archives many years before story year 2005, and only one or two were successfully recaptured, wrecking entire squads of Vahki in the process. Vahki hunters originally favored Po-Metru and Ta-Metru. However, after the coming of the Morbuzakh, increased Vahki patrols made those areas too chaotic. As of the Visorak invasion of Metru Nui, the Vahki hunters were spread out all over the city, usually hiding underground. Their favorite trick was to wait for a Vahki squad to pass by overhead, then burst up through the street, grab the one in the rear, and carry it back below. They would later toss unwanted parts back onto the street.2

Rahaga Pouks was usually the Rahaga who hunted Vahki hunters. Kualus remarked that it was fortunate that Vahki hunters did not pursue living prey, or else they would be almost impossible to stop.2