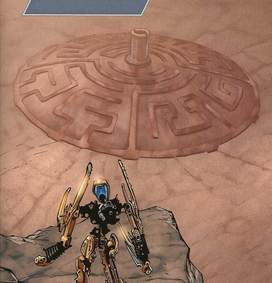 The original power source for the Great Beings' prototype robot was housed in a vast fortress complex located in a valley to the north of the Black Spike Mountains. During the Core War, even as the baterra began cutting into the ranks of the various armies, the Great Beings saw to the construction of an impenetrable maze around their fortress complex. This was intended to keep the Element Lords from seizing the power source within. This led the area being named the "Valley of the Maze" by the Agori.1

After the Shattering, with the liquid they sought dissipated into space, the Element Lords turned their attention to the Valley of the Maze and the power it protected. None of them were able to solve the Great Beings' last riddle.1

The Great Volcano was a huge volcano at the center of the Valley of the Maze. Many tried to penetrate the maze to investigate it over the years, but none ever returned.3

The Great Volcano and the Valley of the Maze were located to the northeast of the Desert of Bara Magna.4

It was known as the Valley of the Maze or Maze Valley.5