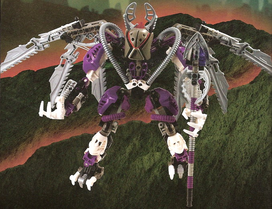 Vanisher was a Dark Hunter1 suspected of being a double agent for the Brotherhood of Makuta. Vanisher was capable of appearing and disappearing at will via dimensional transport, as well as diverting energies hurled against him into other dimensions.2

Vanisher, as he was code-named, was far from an ideal Dark Hunter; he was independent, powerful, and habitually disobeyed orders. He would have been executed long ago if he were not so effective. Vanisher could appear and disappear at will, making him difficult to catch. Like he did with Nidhiki, the Shadowed One tried partnering Vanisher with more faithful Dark Hunters to keep him in line. However, these partners all ended up "accidentally" dying on their missions with Vanisher. Lately, the Shadowed One began to suspect that Vanisher was also working for the Brotherhood of Makuta and was pondering how to use that information to his advantage. Vanisher's power may have been in himself or in his weapon – he refused to say. His spear was capable of opening dimensional gates through which he could step, allowing him to travel vast distances instantly. To an outsider, it would appear that he had simply disappeared. He was also able to open pocket dimensions to capture energies hurled against him. He could keep those energies there until he chose to release them at an opponent. On more than one occasion, Vanisher defeated an enemy using nothing but his opponent's own power.3

If Vanisher had a mask power he could use, it would have been in his description in the Shadowed One's records.4