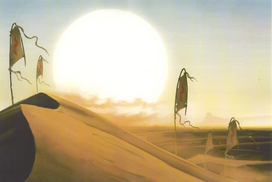 On Bara Magna, the desert area between the villages collectively known as "the wasteland." It was a desolate and dangerous place, home to natural hazards and vicious creatures. Despite this, Glatorian and Agori crossed the wasteland every day, by sand stalker or by wagon, out of necessity. Any traveler across the desert needed first to deal with a few basic challenges. There was precious little plant life and virtually no water among the dunes, so anything needed had to be carried along. Some desert dwellers, like the bone hunters and Vorox, learned to make do with native plants that other might have found inedible. During the day, the temperature soared to extreme heights, then plunged at night to bone-chilling levels. Daytime travel was safer, since one could see threats before they got too close, although it also made it easier for a traveler to be spotted by bandits. Each geographic area also had its own hazards. Travelers who crossed the Dunes of Treason risked running into Vorox colonies, known for killing anyone who came into their territory. If one went too far south of Vulcanus, one ended up in the Sea of Liquid Sand, a massive bed of quicksand few ever escaped. The northern desert, close to the Black Spike Mountains, was home to bone hunters and Skrall patrols. Dangerous creatures could also be found all over the wastelands, including sand bats, dune snakes, rock steeds, and Skopio.1

Many desert creatures (not including the Skopio) feared the heat of mid-day and were not a danger during that time.2