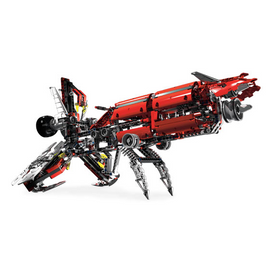 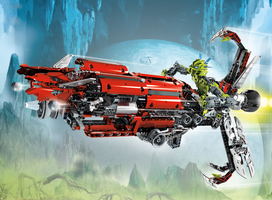 The Axalara T9, piloted by Lewa Nuva, was the most powerful craft in the air in Karda Nui, with multi-weapon functions, thick hull armor, and a cockpit designed to feed sensor information directly to the pilot. While not as fast as the Rockoh T3, it packed a much stronger punch and could take a lot more damage.2, 3 It was armed with dual blaster cannons, had 24-inch thick protosteel armor, tri-arms equipped with lasers and force field capacitors, and a T9 engine capable of 7 million pounds of thrust.2

It had tri-arms equipped with lasers and force field capacitors, a T9 engine with a maximum of 7 million pounds of thrust, a "smart" cockpit, double-reinforced 24 inch thick protosteel armor, cannon compartments that opened and closed, and dual blaster cannons. Lewa Nuva's Kanohi mask had a targeting heads-up display.3

The Axalara T9 was built by Artakha when the universe was new.4