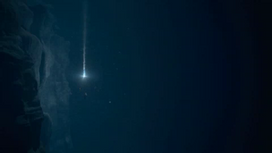 The waters beneath Mahri Nui were known by many names, such as the black water and the deep deep. In fact, they were simply another part of the Pit. The escaped inhabitants of the Pit dwelt in these murky, dark waters. The black water connected the ruins of the original Pit to Mahri Nui above. Although one could reach Mahri Nui by traveling up through the black water from below, it was not recommended.1

The ocean below Mahri Nui, known as the Black Water, was considered to be highly dangerous, inhabited as it was by the Barraki and their armies of sea creatures.2

The water contained a mutagentic agent.3

Beings could walk on the sea floor.4

The original Pit was in a dome. This dome shattered as a result of the Great Cataclysm and the inhabitants escaped into the waters of Aqua Magna. They were unable to escape from that region, so it has effectively become an extension of the Pit. In the upper reaches of this Pit, there were great, curved arches of stone. Mahri Nui landed on those arches, putting it at the upper border of the Pit.5