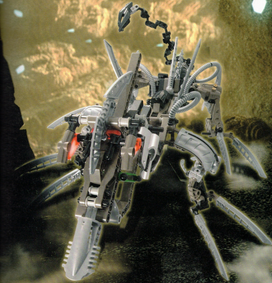 Blade burrowers were tunneling Rahi which inhabited the Onu-Metru Archives. They used their claws to carve tunnels that looked Matoran-made, luring archivists to their doom. They hunted mainly by smell, having poor eyesight. They rarely ventured to the higher levels of the Archives.1

One of the most powerful Rahi known to be in the Onu-Metru Archives sub-levels, the Blade Burrower had been a menace to Matoran for years. Using its powerful claws, it could dig tunnels that closely resembled those created by the Matoran. Archivists had been known to mistake these passageways for parts of the Archives, wander down them, and never be seen again. Blade Burrowers hunted largely by smell, having very poor eyesight. When food was scarce in the sub-levels, they had been known to venture up to the public levels, causing huge amounts of destruction.2

Blade burrowers were one of the most powerful Rahi known to be in the Onu-Metru Archives sub-levels. These Rahi were a menace to Matoran for years. Using their powerful claws, they could dig tunnels that closely resembled Matoran-made ones. Archivists had been known to mistake these passages for parts of the Archives and wander down them only to never be seen again. Blade burrowers had very poor eyesight and hunted largely by smell. When food was scarce in the sub-levels, they had been known to venture up to the public levels, causing huge amounts of destruction. Vahki squads on occasion were hard-pressed to contain an enraged blade burrower, which often used its long, clublike tail as a flail to knock down and disperse its enemies. Fortunately for the Matoran, blade burrowers seemed to be few in number.3

The Visorak made efforts to capture blade burrowers with limited success.3

While the Rahaga lived in the Archives, Bomonga tried mapping the blade burrower tunnels and noted that they did not seem to be random at all, although he did not figure out what they were building.3

Mutran created and named the blade burrower species. When the League of Six Kingdoms was active, Mutran sent blade burrowers among other Rahi to Kalmah's realm in the northwestern regions of the League's territory. Mutran intended for Rahi sent to Kalmah to live for no longer than three days; however, the blade burrowers somehow managed to defy this. Kalmah discovered that when blade burrowers gathered in sufficient numbers, they always burrowed tunnels in a very particular pattern which appeared to be some sort of map. The shape consisted of two long, curved tunnels running north and south, with smaller ones in between. Mutran tried desperately to learn the nature of this map but never succeeded. When Mutran forced a Toa wearing a Kanohi Rau to communicate with the blade burrowers, he learned that the blade burrowers were also not aware of the significance of the design, only that they were compelled to make it.4

The Great Beings are the ones who tampered with the blade burrowers.5