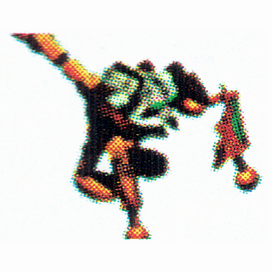 Brakas once roamed freely throughout Le-Metru and Ga-Metru. They were such pests that the Matoran petitioned Turaga Dume to have them banned. The Vahki rounded up all Brakas specimens and put them in the Archives. The Brakas escaped as of story year 2005. The Brakas later appeared on Mata Nui, where they continued to be a nuisance, often stealing fruit from Koro storehouses.2 They inhabited Le-Wahi.3

Brakas were mischievous and known for their distinctive "kau kau" cry.2

Turaga Matau's tool was named the "kau kau" staff, as a joke suggested by Onewa based on the noise made by Brakas in the trees.4