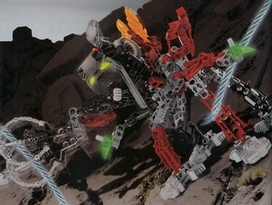 Cable crawlers were Rahi which dwelt in the cables which overhung Le-Metru. They were nocturnal hunters that fed on small birds and were extremely difficult to capture. They had the ability to unleash an energy blast which disrupted its target's sense of balance.1

This bizarre creature made its home in the cables that overhung Le-Metru, preying upon other climbing Rahi and small birds. It possessed two sharp claws able to slice through cables, along with a natural ability to unleash blasts that upset the balance of its enemies and caused vertigo. Cable Crawlers could see in the dark and preferred to hunt by night.2

Cable crawlers were enigmatic Rahi which made their homes in the cables overhanging Le-Metru, preying upon the other climbing Rahi and small birds. They were generally shy and reclusive around Matoran, although they were a particularly bothersome pest. Lurking in the upper reaches of Le-Metru, they had a tendency to use their two sharp claws to slice through power cables and other important structures while looking for prey. Cable crawlers could see in the dark and preferred to hunt by night. One of their most intriguing aspects was their ability to unleash blasts of energy that could upset the balance of their enemies and often caused vertigo. This attack allowed them to overcome smaller prey quickly and to disorient larger enemies long enough to flee.3

Cable crawlers were known to nest inside the cargo holds of Matoran airships. This was not discovered until a shipment of Rahi bound by air for the Archives was found devoured by cable crawlers when the hold was opened.3

Rahaga Iruini remarked that cable crawlers were hard to spot and hard to capture. They knew the cables well and could disappear into them instantly. Although climbers were his specialty, Bomonga greatly helped him capture cable crawlers with his ability to stay completely still for hours and lure them close, since surprise was the only way to snare them.3

The energy blasts cable crawlers used to give targets feelings of vertigo were its Rhotuka.4