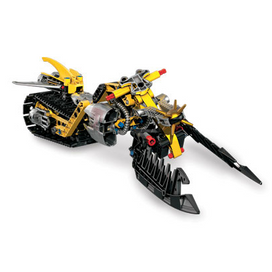 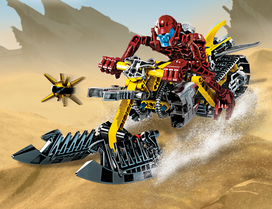 Crotesius discovered the Cendox V1 half-buried in sand near some ruins to the north of Vulcanus. Crotesius had never figured out what powered the vehicle. The Cendox V1 was armed with front blades and a Thornax launcher. While not as fast as the Kaxium V3, it was more heavily armored. It was originally built by the fire tribe during the Core War and was one of many. Most of them were lost in battle prior to the Shattering. It was possible that there were others buried in the sand in the same area where Crotesius found his. The Cendox was powerful for its size, but its attacks depended on facing an opponent head-on. In battle, Crotesius used the boosters to accelerate in turns so that the sides of the Cendox were not exposed to enemy attack any longer than necessary. One of Crotesius's favorite tricks in the arena was to hook an opposing vehicle with the front blades, then pull back on the stick, kick in the boosters, and hurl the other vehicle through the air. The front blades of the Cendox V1 were coated with exsidian, to enable them to resist corrosion. In addition to allowing for smooth running through sand, they were sharpened and could tear great gashes in opposing vehicles. The Cendox was equipped with powerful boosters that could provide short bursts of great speed. These were Crotesius's favorite feature because they helped him outdistance pursuit in the desert. The mounted Thornax launcher was usually used for non-explosive Thornax. Crotesius preferred to damage an opposing vehicle and slow it down without disabling it, then finish it off with the blades. Rear tracks made it easy for the Cendox to operate in all kinds of terrain. These were badly damaged when the vehicle was first recovered and repaired by Berix, then later damaged again by a Kaxium V3 Thornax. "Cendox" was an Agori word meaning "serpent strike." The original name of the vehicle, if it had one, was unknown; Crotesius gave it the name Cendox V1.1