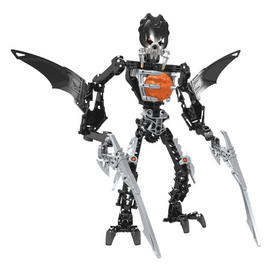 A brilliant Makuta, Chirox's Rahi creations tended to be creatures that were not helpful or benevolent, but destructive. Mutran was Chirox's long-time rival among the Makuta. Chirox wore the Kanohi Shelek, the Mask of Silence, which could rob an opponent of the abilities to speak and hear. He carried a pair of hook blades and a Tridax pod filled with shadow leeches. He was blinded by the explosion of light in Karda Nui and had to rely on a shadow Matoran to provide him with sight.1

Chirox was one of the Brotherhood of Makuta's top scientists. He was known for creating monstrous Rahi. He wore the Kanohi Shelek, the Mask of Silence, which temporarily robbed enemies of the ability to speak or hear. Kirop's power to temporarily rob a foe of his sight made them a lethal combination in a fight. Chirox was an expert at making Rahi beasts.2

Chirox and Mutran specialized in continuing to refine their abilities to create Rahi.4

Mutran and Chirox found they could often find volunteers for their experiments from Gorast's region, since the inhabitants would do anything to get away from her. This stopped when Gorast destroyed Chirox's lab on Destral and threatened to do the same to him.5

Chirox oversaw the region including Visorak and Keetongu's island. Chirox created the Visorak.6 Chirox did not oversee the island with the energized protodermis lake because it was a particularly valuable location, and Teridax did not choose to have Chirox watch over it.7

Chirox had a Toa Hagah team.8