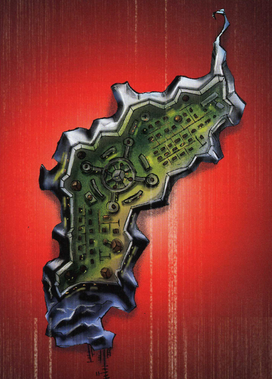 The island of Destral was the Brotherhood of Makuta's first and largest fortress. It served as their headquarters during their war with the Dark Hunters. The island's location changed regularly; it was believed that the Brotherhood used some version of the Kanohi Olmak to move it through dimensional gates. It was heavily defended by concealed weaponry and traps, as well as legions of Visorak, Rahkshi, and Exo-Toa. Outside the fortress, Destral was largely barren and had no native inhabitants.1

The island of Destral was once a symbol of justice, truth, and loyalty. However, the Brotherhood of Makuta's history blackened its name. The harsh, forbidding fortress resting on the barren plain was a sickening sight. Destral was the site of one of the Brotherhood of Makuta's largest fortresses. It served as their headquarters in their war with the Dark Hunters. From here, the Brotherhood plotted their continual criminal acts against the Matoran universe as a whole. The fortress was so impregnable that even the Order of Mata Nui shuddered at the thought of trying to capture it.2

The Brotherhood made no attempt to erect barriers at sea or in the air in defense of Destral, since they relished the opportunity to interrogate and experiment upon captured invaders. Destral was a mobile base, periodically traveling through a massive dimensional gate to other parts of the Matoran universe. The Order of Mata Nui hypothesized that the Brotherhood either had access to a far more powerful version of the Kanohi Olmak, or else to a wearer for the standard version who could take advantage of every last bit of its power. Order agents who witnessed the transportation of the island reported that the island appeared to travel through a massive dimensional gate at the time of its disappearance. The Order was somewhat puzzled as to why the Brotherhood did not use such a potent weapon more often.2

Requiring only space for experimentation and access to large amounts of energized protodermis, the Brotherhood of Makuta found both on Destral and selected it as its first facility. From its founding, Destral remained unchanged, a largely barren region dominated by the Brotherhood's fortress. The island itself was easily reachable, but concealed weaponry and traps waited on its rocky shore to claim the unwary. One fault in the island's security was that it was somewhat easier to escape than it was to break in. Visorak spiders prowled the fortress grounds.2

The fortress of Destral was massive, containing living quarters for the members of the Brotherhood, workshops, laboratories, armories, prison cells, interrogation chambers, and a library of forbidden knowledge. It was guarded at all times by Visorak, Rahkshi, and Exo-Toa.2

Visorak were the primary Rahi found on Destral.2

The Order of Mata Nui suspected that the Brotherhood of Makuta had access to a more powerful version of the Kanohi Olmak, or something similar, which they used to transport the island of Destral from place to place.3

The chamber that Tridax interrogated Vezon in had masks and weapons in it. It had a stone floor. The fortress of Destral was an ancient structure.4

Vezon followed Tridax through hallways into a sub-basement. At the bottom of the basement was a massive chamber. The walls towered 40 feet all around. Lining them were close to 100 stasis tubes, each one occupied by an identical figure: Toa Takanuva. A few of them had armor of jet black, and most of them were white and gold. A small table sat in the center of the room. On the table was a Kanohi mask. This mask was a Kanohi Olmak, one of only two known to exist. Tridax had been building an army of shadow Takanuva from other realities.4

The Brotherhood's main fortress was located on the island of Destral. The island was capable of being teleported to various locations as needed by the Makuta. It was guarded by Rahkshi, Visorak, and Exo-Toa.5

The Olmak itself couldn't be used to send something island-sized into another dimension, but it might be possible with a larger version that had more power.6