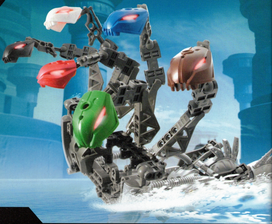 The doom viper was a breed of multi-headed serpent Rahi whose toxic breath was capable of killing any living thing it touched. Doom vipers came to Ga-Metru on a trading boat from another land and proved extremely hard to capture. None seemed to have made it to Mata Nui.1

Doom vipers were multi-headed serpent Rahi. They were one of the most feared and hated Rahi in all of Ga-Metru. They came to Metru Nui as stowaways aboard a trading vessel from another land and first appeared shortly afterward. Residents rapidly discovered how dangerous they could be. A doom viper's breath was a toxic compound, capable of killing any plant or animal life it touched (except for doom vipers). Only the mechanical Vahki, being immune to the venom, had any success against these Rahi.2

With the Vahki otherwise occupied after the Great Cataclysm, doom vipers wandered Ga-Metru at will. Visorak managed to captured doom vipers in the past, but even Visorak webbing weakened when exposed to the viper's venomous power. Given the difficulty of capturing doom vipers, the Visorak made efforts to contain them, often herding them into enclosed spaces and then sealing them in with rock and stone. Occasionally, another Rahi seeking a hiding place would unearth one of these tombs, only to discover that the doom vipers inside were still alive and to meet its demise. Norik was compelled to save even the doom vipers from the Visorak. Norik remarked that capturing a doom viper required keeping one's distance and making sure it was unconscious before going near.2

All Doom Vipers had six heads.3