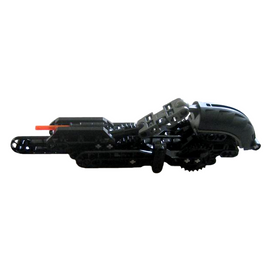 The energy extraction rifle was a type of weapon manufactured on Xia. It absorbed a target's energy similar to the power of Vorahk, evening the odds in combat for beings who did not have natural powers, such as Matoran and Vortixx. The energy could be stored and manipulated, providing a quick, efficient power source, among other things. However, the energy could not be directly transferred into other beings. The rifle had the ability to drain large amounts of power, but it was fragile and prone to overloading if the energy was not properly discharged from it. When the energy extraction rifle was used on a Makuta, the Makuta was unaffected, and the rifle was heavily damaged, but a Kraata appeared on the rifle. This meant that the rifle could be used as a quick, painless way for a Makuta to create Kraata. With slight modifications to the rifle, a Makuta could also drain his own energy into it and channel the resulting essence through the rifle, much like a Toa tool. However, since the rifle sustained heavy damage after each use, these ways of using the weapon were impractical.1