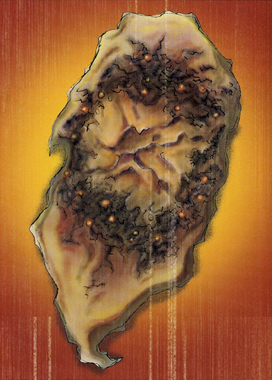 Xia was the island home of the Vortixx and source of much of the weaponry used by the Dark Hunters and the Brotherhood of Makuta.1

It was a journey of many days to take the Kanohi Dragon from Metru Nui to Xia. Once there, the barge sailed up to a dock made of black, twisted metal. The look and feel of the island disturbed the Toa. Though parts seemed tropical and wild, much of the rest of it was covered with dull iron buildings that spewed foul smoke into the sky. Arrays of war machines could be found inside the factories.2

Xia welcomed visitors as long as they came to do business.3

Xia was best known for its weapons manufacturing industry. It was also known for being a dumping ground for the problems of other islands. Later, it was famous for being the homeland of Roodaka.3

Xia was a land dominated by greed. The greatest crime in its society was to make a deal that did not turn a profit – doing so led to immediate execution or even a second visit to the Mountain.3

The inhabitants of Xia strove to make it easy for visitors to come to their island and purchase their wares. Xia was reachable through a number of sea routes patrolled by craft from Xia to ensure that no menaces such as sea raiders or Frostelus harassed visiting ships. Xia had an excellent port system as well as areas for airship landings. It was located within easy sailing distance from Metru Nui; one could simply travel through main southern sea gate and turn sharply east, staying close to the Great Barrier. Xia was unmistakable from a kio away.3

A rocky peak simply called "the Mountain" by Xia's residents dominated Xia's landscape. All around the peak, covering every bit of available space, were forges, factories, warehouses, and docks. There were no homes or shelters; the island's workers slept near their posts in case a sudden order required them to return to their labors immediately.3

The island was an environmental disaster. The air was black with soot and dust, and the island had no fresh water. The only water source was a thin, dirty stream which wound around the Mountain, passing through countless factories on its way. Clean air was said to be found at the top of the Mountain, although this served as more of a tease than as a refuge from the pollution below.3

Xia's customers eventually included the Brotherhood of Makuta and the Dark Hunters.3

At times, Xia served as a receptacle for unwanted things from other islands. For instance, the Kanohi Dragon was brought to Xia after its defeat in Metru Nui by Toa Lhikan and his team.3

In recent times, Xia's main customer was the Brotherhood of Makuta.3

The inhabitants of Xia were the Vortixx.3

The people of Xia were not called Xians.4

Xia was an island name, but its inhabitants were not called Xians.5

Except for a few insects, no Rahi were able to live on Xia. Seabirds which migrated from other islands usually died from pollution very quickly. The Mountain was the closest thing to wildlife on Xia.3

Xia was once part of the kingdom of Pridak and served as a supplier of arms and armor to the League of Six Kingdoms. After the League collapsed, Xia continued to produce weapons for anyone who wanted them. AS a result of its rampant industry, the island was an environmental disaster. Its dominant central landmark was the Mountain.1

Xia was a land where ruthlessness and the ability to deceive were required to survive.6

Among the many war engines built on the island of Xia was the Visorak Battle Ram.7

As early as 100,000 years ago, Xia was full of factories and hard-working inhabitants.8

On Xia, the sky could rain fire, the grass was filled with acid, and the rock could eat beings.11

Xia was probably not invaded by Visorak because Roodaka worked for the Brotherhood of Makuta.12

The machines of war built on Xia were not Exo-Toa, but instead were weapons such as battering rams.13

Xia had nothing to do with the production of Rhotuka spinners. The weapons they made were more along the lines of the Visorak Battle Ram.14

It's possible the inhabitants of Xia could build Toa armor.15

Roodaka's island, where she accepted the Kanohi Dragon, was Xia.16

Xia supplied anyone who was willing to pay.17

Xia's morality was debatable, but they were certainly mercenary.18

There were very, very few Rahi species on Xia, as most Rahi couldn't survive there. Roodaka's species was the only intelligent species living there; no Matoran lived there.19

Xia was great at supplying weapons, but its people had no real interest in being part of an army. They weren't soldiers, they were weaponsmiths.20

Some of the many weapons manufactured on Xia included:21

There was probably an Order of Mata Nui agent on Xia.22