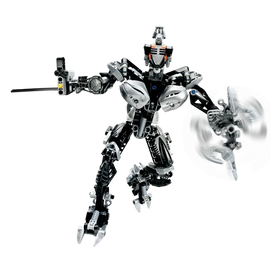 Vortixx were the native species of the island of Xia. Vortixx society was dominated by females. The population as a whole was made up of tall, lean, powerful beings in black armor. Males labored in the dirtiest and most dangerous jobs on the island. The Vortixx were an industrious and greedy people, best known for producing weapons for whoever paid them. They were initially employed by the League of Six Kingdoms and since that time did work for the Dark Hunters and the Brotherhood of Makuta. The Vortixx were officially neutral in the Dark Hunter-Brotherhood of Makuta War. Roodaka was easily the most famous Vortixx, having served as the viceroy of the Visorak horde during the invasion of Metru Nui.1

Vortixx were the inhabitants of Xia. They were tall, lean, powerful beings clad all in black armor. Females dominated their society, and they were the only Vortixx ever allowed to leave the island. Males labored in the dirtiest and most dangerous jobs. Females served as overseers and weapons designers. Every Vortixx was required at some point in his or her life to climb the Mountain as a rite of passage. In this ritual, a male and female climbed the Mountain together. If they both made it to the top, they were honored and given better working conditions. However, true praise was reserved for cases where only one of them survived, as this proved that the survivor had the ruthlessness required to survive. Generally, the Vortixx had no interest in conquest. They rather preferred building weapons and letting others undertake the risks of battle. The Vortixx cared very little about who won or lost, or who ruled, as long as they received payment.2

When a male Vortixx (who was a laborer) once saw the Shadowed One, he immediately dropped to one knee and bowed his head. The Vortixx, it seemed, had a long history of known when and to whom to submit. Exiled Vortixx were among those found in the worst holes in the universe by Pridak.3

Vortixx were able to use Kanohi.4

The Rahaga could have been mutated back into Toa by a Vortixx who was not Roodaka.5

Vortixx simply knew what their gender was, the same way Matoran did. They had no outward physical characteristics pertaining to their gender, it was more a mental thing to them.8