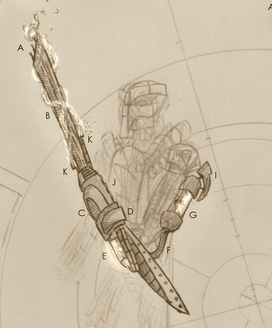 The energy siphon blade was a type of weapon manufactured on Xia. The prongs on the end of the blade began draining the strength and energy of any being they were pressed against in a manner similar to the power of Vorahk. Not only did this weaken the target, but the blade became enveloped in the energy absorbed. Three models of the energy siphon blade were produced. Model B was created for use by Toa- or Skakdi- sized beings, Model C was designed for larger beings, and Model D made use of melted-down enlargement and shrink Kanoka to change size with shapeshifting species such as Makuta. There was originally a Model A designed for smaller beings such as Matoran, but it was deemed unprofitable and scrapped. The weapon was highly useful against beings with elemental powers that did not naturally come with added strength (water, ice, fire, air, etc.), but beings with elements that did (earth, stone, and iron) had a certain degree of resistance to it.1

The energy siphon blade was a winning entry of the Xian weapons canonization contest run on BZPower in 2008. The original entry named the weapon the "Nihu-Motara" Energy Siphon Blade, but since the non-canon backstory given in the entry implied that the name came from two of the Toa Mangai, this part of the name has been removed for the purposes of this article. Greg Farshtey later specifically said that only the functionality of the weapon was canonized, not the name.2