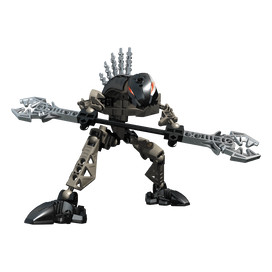 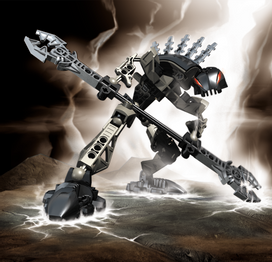 Vorahk was one of the six Rahkshi sent by Makuta to stop the Herald and recover the Kanohi Avhokii. Vorahk's staff could be used to absorb the power of an enemy and transfer it temporarily into itself. The staff had to be in physical contact with the target for this to work.1

Vorahk hungered for power. His Staff of Power could drain the energy from any opponent and transfer it to himself. He was the most skilled of all Makuta's seekers. Nothing escaped his sight.2

Vohrahk's color was black, and its type was weakener. Its Staff of Power could drain the energy of a foe, which allowed Vohrahk to absorb it. As his opponents grew weaker, Vorahk grew stronger. His staff needed to be in physical contact with its target to use this ability. Vorahk was the best hunter of all the Rahkshi. His opponents had no hope of hiding from him. Makuta hoped that Vorahk would sap the Toa Nuva's strength, making it impossible for them to achieve their destiny.3

Vorahk was the Rahkshi of Hunger, and its Staff of Hunger allowed it to drain energy from an opponents and grow stronger itself. The staff actually needed to make contact with the target to work.5

Vorahk stole an opponent's energy. The opponent could rest and replenish that energy, but for how long depended on how much energy was taken.6 Vorahk retained the energy for a limited time.7

Vorahk was the most intelligent of the six Rahkshi Teridax used on Mata Nui.8