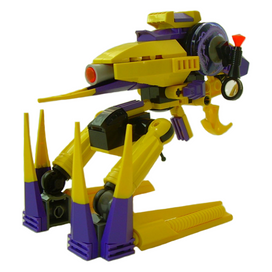 The Hagah plasma cannon was a type of weapon manufactured on Xia. It could act as a fixed turret or a hand-held device depending on the user. The fixed form was normally used by Matoran or species of similar height. With the flip of a switch, it could be transformed into a hand-held weapon for use by larger beings such as Toa. A battery on one side of the weapon supplied power, feeding energy through energy-conducting tubes. The energy was used to heat up plasma in the plasma tank and feed it into the barrel, where it was kept in place by a force field. Once enough plasma was built up against the shield, the shield disappeared, and the pressurized plasma was blasted forward. The plasma was discharged when the user gripped one of the two sensitive handles. A laser was included on the cannon for improved accuracy. Because the laser required light, the cannon was normally used in daylight; it could still operate in the dark, but less accurately.1

Its name presumably came from the fact that hagah meant "guardian" in Matoran.