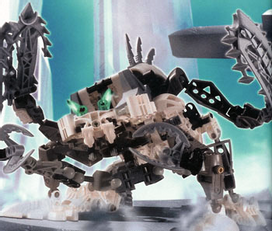 Frost beetles were insectoid Rahi of Ko-Metru which were rumored to have Matoran-level or greater-than-average intelligence as a result of consuming memory crystals.1, 2 They were never spotted on Mata Nui.1

Frost beetles appeared to be sizable insects with a hostile nature. However, some believed their behavior masked an almost Matoran-level intelligence. They lived in Ko-Metru and had a habit of living near knowledge towers, which some believed was not a coincidence. Frost beetles were heavily armored and had razor-sharp claws, more than capable of defending themselves against predators. Although they could have easily driven away other small creatures and claimed much of Ko-Metru for themselves, they seemed to spend most of their time trying to force their way into the knowledge towers. Frost beetles were known to consume the crystals used to grow new knowledge towers.3

Matoro once proposed a theory that, at one point, some frost beetles consumed memory crystals and somehow absorbed the knowledge inside them, passing it on to others through a sort of hive-mind and thus increasing the intelligence of the entire species. Although far-fetched, it seemed to explain their behavior.3

During the Visorak invasion in Metru Nui, judging from Nuju's accounts of these creatures, Norik remarked that it would almost be better to leave them to the Visorak, knowing that they would cause a great deal of damage to the unguarded knowledge towers.3