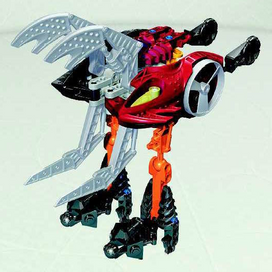 Gate Guardians were a deceptive Rahi breed which created false images of themselves to fool enemies. A Gate Guardian appeared to others as a small creature, perhaps 1.5 feet tall. The Rahi was much bigger in reality but virtually impossible to see. An attacker attacking the smaller image, which mimicked the movements of the real creature, would be beaten back by the larger, invisible Gate Guardian. The only way to defeat a Gate Guardian was to find some way to reveal its true form first. Gate Guardians were believed to be allied with the Visorak.1

The Gate Guardian projected an image of a smaller version of itself while keeping its true self invisible, as a trap for the unwary. All one ever saw of a Gate Guardian was a relatively small creature, ranging from 1.5 to 4 feet in height, whereas the true Gate Guardian was roughly two or three times the size of the one visible. The smaller version mimicked the actions of the larger, unseen guardian. If one approached a Gate Guardian, one would be batted aside long before he reached it, although the creature would never seem to have touched him. For example, the smaller creature might appear to kick out its leg, while the real Gate Guardian's leg, whose reach was longer and which was far more powerful, connected with its foe. Enemies often exhausted themselves trying to bring down the small Gate Guardian they saw, never knowing their true opponent was hidden from them. If they failed to discover the Gate Guardian's deception, they would quickly lose the battle.2

Gate Guardians were followers of the Visorak, used as sentries for sites that were important but not so vital that a Kahgarak was required.2

During the Visorak invasion of Metru Nui, they were active city-wide.2

Gaaki remarked that Gate Guardians were vicious and cowardly, hiding behind a false front so they could attack at will.2