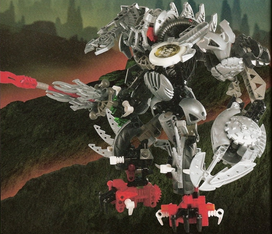 Transformed by the Shadowed One

Gatherer was a Matoran transformed by the Shadowed One into an armored colossus in the service of the Dark Hunters.2, 3 He had no need for food or sleep and carried a wide array of weapons. He had a psychic connection to underground-dwelling Rahi and could command them to do his bidding.2

Originally, Gatherer, as he was code-named, was a Matoran, a leader among Matoran renowned for his honesty and fairness. When he became an obstacle to Dark Hunter operations in the area, the Shadowed One ordered his capture. Somehow, the Shadowed One managed to coerce Gatherer into joining the ranks of the Dark Hunters, augmenting him with abilities to use against their enemies. With each successful mission, Gatherer took a piece of armor from his opponent and added it to his own, becoming an armored colossus. The Shadowed One did not care whether Gatherer had any compunctions that might cause him to resent his life as a Dark Hunter as long as he continued to follow orders.4

Gatherer was engineered so he had no need for food or sleep. He had a psychic connection to Rahi who dwelled underground and could command them to do his bidding. He carried a wide array of weapons, including one blade that could slice through solid protodermis, another that doubled as a shield, and an energy cannon. His Rhotuka spinner [sic, Kanoka disk] had the mind scramble power.4