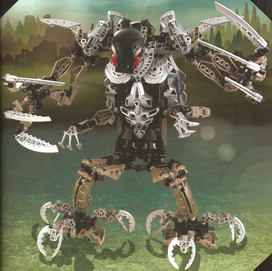 Gladiator, a native of Sidorak and Krekka's home island, was a warrior in the arena until being freed from prison by a Dark Hunter and recruited into the Dark Hunters.1, 2 He had brute strength, sharp claws, and an incredible resistance to damage.1

Gladiator, as he was code-named, was originally an arena fighter on Stelt. Stelt's culture thrived on war, and even its entertainment was built around violence. Gatherer was one of the massive warriors who fought to the death in an arena for the amusement of their masters. Gladiator was always a crowd favorite, beating native opponents and prisoners from other islands. Gladiator was native to Stelt.3

Gladiator's main power was his brute strength, backed up by vicious claws and an incredible resistance to damage. Often, his presence was so intimidating that he did not even need to resort to violence to achieve his goals.3

In his battle with Sidorak, Gladiator dove, dodged, and showed amazing agility despite his impressive size. When Sidorak, exhausted, gave him an opening, Gladiator struck with two swift blows.4

Gladiator was not a member of Sidorak's or Krekka's species.5