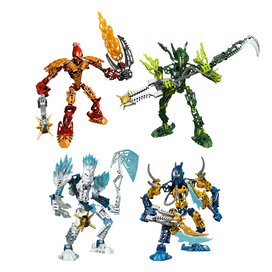 When villages on Bara Magna had a dispute, they settled it with battles between Glatorian fighters in their arenas. Once a year, Glatorian from all over Bara Magna gathered for the right to be called champion. They came to Arena Magna in the city of Atero to compete, to talk, to share news and new battle tactics.1

Gresh was the only Prime or Second Glatorian who did not fight in the Core War.2

The Glatorian system was complicated. Villages had to make sure that they did not wear their fighters out by scheduling matches too close to each other, along with making sure they matched their best fighter up with the opposing village's best fighter. That kind of coordination took a lot of work and time, and most Agori did not have it to spare. More and more, they started turning to Metus to set up matches as needed. Although there were other Agori who did this work (just about every village had someone), none were as good at it as Metus.3

Arena matches were how the villages of Bara Magna settled arguments while avoiding wars.4

The social structure of Bara Magna depended on the system of Glatorian matches, invented by Certavus, Tarix, and Ackar a little less than 100,000 years ago. The scattered villages of the desert had limited resources, and it was natural that conflicts would arise among them. In the wake of the Core War, however, no one wanted more battles that could wipe out entire populations. The idea was born that disputes between villages would be settled by arena battles between warriors called Glatorian. Most Glatorian were veterans of the Core War. In return for fighting for a village, they were provided with food, shelter, medical care, equipment, and other goods. Given that the alternative was life as a bandit in the wastelands, or worse, most warriors were happy to take the job. Each village maintained two fighters, a Prime Glatorian and a Second Glatorian, along with a number of trainees. The reason for having only two main fighters was that most villages could not afford the cost of keeping more. Whenever a disagreement occurred between two villages over some resource, such as a water source or a piece of land, each village sent a Glatorian to fight for it. The winner's village claimed the resource, while the loser's got nothing. While Agori did attend the matches as a source of entertainment, they were much more; the survival of an entire village could depend on the outcome of a match. Most matches were fought in one of the five villages. Once a year, Glatorian from all over gathered in the Arena Magna in Atero for a tournament to determine the overall champion. As of story year 2009, Tarix of Tajun was currently the reigning champion.5

Of the six tribes, only the sand tribe did not send Glatorian to the arena. As of story year 2009, two villages were short a fighter: Vulcanus, due to the exile of Malum, and Iconox, due to Gelu's retirement from the arena. Both were seeking to recruit new Glatorian.5

The life of an exiled Glatorian was brutal and usually short. If they were not killed by desert creatures or bone hunters, and if they did not die of hunger or thirst, they usually wound up as bandits, or worse, went mad.8

Gresh was the youngest Second Glatorian in the history of Bara Magna. While some Glatorian would pass right by an Agori in trouble if he could not pay, Gresh believed that he had an obligation to help those weaker than he. It was normally, at best, frowned upon, and in some places even forbidden, for a Glatorian to train in other villages besides his own. However, the village elders were willing to make an exception for Gresh.9

The Glatorian Creed, written by Tarix, explained how matches were to be fought and why the Glatorian system was needed.10

Glatorian (except for the Skrall) were all of the same species.12

Glatorian were not strictly part of a tribe, but just worked for a tribe.13 Glatorian was merely a job title.14

The Glatorian did what they did for reasons of necessity, payment, and enjoyment. There was a need for them, and in return, they needed food, shelter, equipment repair, and so on, which could best be provided by a village. Glatorian made various earnings for winning battles.15

Glatorian were essentially freelance, but some had preference for a single tribe and worked regularly for them. Any tribe could hire a Glatorian with the colors of a different tribe.16

There were members of the Glatorian's species that did not fight as Glatorian.17

There were rules for Glatorian fighting in arenas. Depending on how badly one disobeyed them, one could end up exiled to the wastelands.18

Glatorian did not have any special powers or abilities.21 The helmets they wore, unlike Kanohi masks, had no particular function other than protection.22

Glatorian matches were not fought to the death. In general, Glatorian did not fight to the death. Sometimes, people did die in the arena inadvertently, but normally the fight ended when one side was clearly defeated.23

Trying to kill an opponent in the arena who had already given up was a major violation of arena rules. Malum was exiled to the wastelands for this crime.24, 25

Some Glatorian owned the vehicles they used in combat.26

Only a Glatorian's own tribe would exile him for crimes in the arena.27

Before the Shattering, Glatorian were soldiers.28 Glatorian developed fighting skills from their military training and from their training with each other.29

There were not too many Glatorian on Bara Magna – certainly fewer than a hundred. There were always old Glatorian dying off and new ones coming into the profession.30

Resources were always at stake in arena matches. Only in Atero were the fights for honor, as opposed to something practical.31

If one wanted a Glatorian to hire, one talked to someone like Metus, who recruited and trained fighters.32

A Glatorian match could take place in any arena, but normally it was the arena of one of the contestants.33

If a village refused another tribe's challenge for land, the land was considered forfeited.34

Most arena vehicle combat was done by Agori.35 Most vehicles were probably designed prior to the Core War and were modified for arena combat over the years.36

The means and timing of concession in a Glatorian match was entirely up to the participants. It was never required that one of the fighters forfeit; a Glatorian could keep fighting until he was knocked out or crippled and have no choice but to concede. Most warriors, however, did not see the point in doing that.37

Most Glatorian took the position for pragmatic reasons, and not for noble and heroic reasons. Most of them were milirary veterans and saw it as a job; it was how they got their food, shelter, and equipment.38

It was common for Glatorian to wear armor that matched their affiliation, but it was not necessary. For example, Gresh could have decided to leave Tesara and work for Iconox and keep his green armor.39