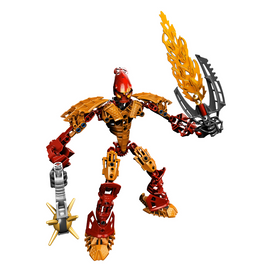 Ackar was a veteran warrior of the Fire Tribe and Glatorian of Vulcanus who aided Mata Nui during his adventures on Bara Magna.

During the Core War, Ackar was a soldier with a leadership position in the Fire Tribe army. After the Shattering, Ackar settled with other Fire Tribe survivors in the village of Vulcanus, located in the Bara Magna desert. Ackar was one of the Core War veterans who proposed the Glatorian system to resolve disputes among villages over the scarce resources in the desert. Ackar led a highly successful career as Prime Glatorian of Vulcanus for thousands of years.

By the time the Skrall started to invade the Bara Magna desert, Ackar was the oldest active Glatorian, and his performance in the arena had begun to betray his advanced age. Despite this, Ackar took an active role in defending Vulcanus from rising threats from the Bone Hunters and Skrall. When Mata Nui arrived on Bara Magna and saved Ackar from an illegal sneak attack during a match with Strakk, Ackar agreed to aid Mata Nui in his quest to return to his homeland. Ackar trained Mata Nui in combat as they traveled throughout Bara Magna, and Mata Nui later returned the favor by granting Ackar the elemental power of fire. Ackar played an important part in the victory at the Battle of Roxtus, which scattered the Skrall army.

After Mata Nui defeated Makuta Teridax, repaired the planet of Spherus Magna, and went into dormancy, Ackar worked to help the inhabitants of the Matoran universe integrate with the native Agori and Glatorian population to build a new society on Spherus Magna.

Ackar was the Prime Glatorian of the village of Vulcanus, a former tournament champion, and a Core War veteran. The oldest active Glatorian, he was a little slower in the arena as of story year 2009 but still a fighter worthy of respect. If Ackar had been fighting on a normal schedule, his record likely would have been better, but with the exile of Malum and no Second Glatorian to take his place, Ackar had to fight twice as many matches, and fatigue hurt his performance. Although he was a skilled fighter, Ackar's biggest enemy in recent years was himself. Convinced his age was eroding his skills, he worried about letting Vulcanus down. He also did not want to be one of those Glatorian who kept trying to fight long past the point he should stop. Nonetheless, with Malum's exile and some of the best trainees slain by the bone hunters, he saw himself as having little choice but to keep fighting. Despite this, Ackar remained a great strategist and a brave warrior. While he was close to Tarix and Vastus, Ackar's best friend among the Glatorian was Kiina. She reminded him of himself when he was younger – brash, bold, and always ready for a fight. He did his best to keep her impulsive nature and her hot temper in check, but in battle, there was no one else he wanted fighting beside him. Although he knew her dream was to leave Bara Magna, he hoped that day would never come. Ackar carried a Thornax launcher and a flame sword. His original blade had been stolen some time ago as of story year 2009 but was retrieved for him by Gresh and Strakk in a raid on Roxtus.2

Ackar was the Prime Glatorian of Vulcanus. As of story year 2009, he was a veteran fighter who some felt may have been past his prime.3

Ackar was listed on the Wall of Champions.4

Ackar was a famous veteran Glatorian.5

Mata Nui compared Ackar to Onua, having tremendous strength tempered with wisdom. Both were strategists and were respected by all who knew them. Mata Nui observed that both Ackar's word and his approval were things that Kiina valued.6

Once an arena champion, Ackar was older, wiser, and more dangerous. Allied with Mata Nui, he relied on his flame sword and spiked Thornax launcher in the battle against the Skrall.7

Ackar said that he did not always agree with Kiina's methods, but he respected her ability and had trusted her with his life on multiple occasions.8

Kiina was a close friend of Ackar.1

Ackar was of the Fire Tribe and was located in Vulcanus. His equipment was a flame sword and Thornax launcher.1

Ackar was the Prime Glatorian of the village of Vulcanus, a former tournament champion, and a Core War veteran. Although he was once one of the top fighters in the Bara Magna arenas, age slowed him down a little, and Vulcanus had considered retiring him. After the exile of Second Glatorian Malum for crimes in the arena and the death of Vulcanus' top trainees at the hands of bone hunters, Ackar was forced to fight even more matches than before.1

Mata Nui thanked Ackar by granting him control over the elemental power of fire. Ackar was grateful for the new ability, but he had not mastered it and kept accidentally starting fires everywhere he went. After the Agori villages were united, Ackar was placed in command of all the Glatorian forces.1

In terms of personality, Ackar was loyal and brave. He could at times be a reluctant warrior. He had seen a lot of death and suffering in his time and despised the waste. However, when the Agori were threatened, he would do whatever he had to in order to protect them from harm.1

Ackar was a veteran of the Core War, having fought in the battle of Iron Canyon, among others. Ackar was the oldest active Glatorian.1

Ackar was the Glatorian champion several years before story year 2009.9