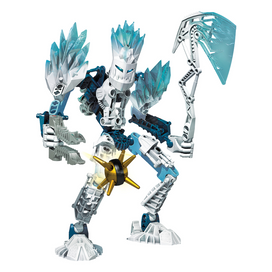 Strakk was one of the most controversial Prime Glatorian on Bara Magna and was disliked by just about every other fighter. Despite this, the village of Iconox could not argue with his results, which included impressive wins over Vastus and Kiina in recent matches as of story year 2009. With Second Glatorian Gelu having retired, Iconox was depending more and more on Strakk for victories. An ambitious fighter, Strakk was determined to become the champion Glatorian on Bara Magna, and he did not really care how he had to do it. He was a master at cheating without being caught, doing everything from throwing sand in an opponent's eyes to reflecting the sun off his ice axe to blind a foe temporarily. It was generally accepted among other Glatorian that there was nothing Strakk would not do, and most fighters took a special pleasure in beating him in the arena when they could. If one asked him, Strakk would say he was the most honest Glatorian out there. He did not claim to be fighting for the good of Iconox or peace on Bara Magna. Instead, he proudly admitted that he did it for personal profit. In fact, Strakk had been known to ride right past Agori in trouble if they had no way to pay for his services. Although they were as different as two Glatorian could be, Gresh seemed to understand best how to handle Strakk. If he wanted to get Strakk to go somewhere or do something, he told him about the riches available in return (even if they did not really exist). If he needed Strakk to keep going when the ice Glatorian wanted to turn back, he made it clear that there was a spiked Thornax waiting to be fired at him if he tried to leave (an argument which Strakk usually found very persuasive). Strakk carried a Thornax launcher and an ice axe. Although he was reluctant to follow Mata Nui's lead, if the other Glatorian were to unite behind him, Strakk would feel forced to go along.2

Strakk was fast, fierce, and willing to break the rules to win in the arena. Opponents knew to watch out for his ice axe and spiky Thornax launcher, and never to turn their back on this trick fighter.3

Gresh was very good at handling Strakk, once getting him to help a village out by tricking him into thinking a fortune in precious metal was buried beneath the place.1

Strakk was of the Ice Tribe and was located in Iconox. His equipment was an ice axe and a Thornax launcher.1

One of the most controversial Glatorian, Strakk was more than willing to cheat in the arena if it meant a victory. In his time, he did everything from throwing sand in an opponent's eyes to reflecting the sun off his ice axe to temporarily blind a foe. Other Glatorian, knowing what Strakk was capable of, were more than happy to beat him in the arena when they could.1

In terms of personality, Strakk was self-centered and all about profit. He had been known to ride right past an Agori in trouble if the villager was not able to pay for his services.1 Strakk would gladly ride to one's rescue, fight off one's enemies, and save one's life, provided one agreed to payment terms first and the odds were good. If not, he would just as gladly ride past someone in need.4, 5

Strakk was suspected by some Glatorian of being the traitor who was providing information to the Skrall.1

Metus trained a number of Glatorian, including Strakk.1

Every Glatorian wished to see his or her name inscribed on the Wall of Champions, and some, like Strakk, were willing to do just about anything to win, as a tournament winner could ask for better rewards from his village, or from another village if his current one did not want to pay.6

Gresh and Strakk did not get along at all.7 Gresh and Tarix tolerated Strakk.8