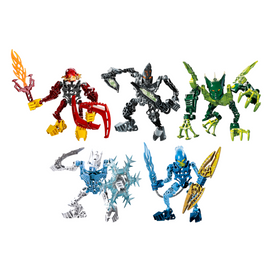 Agori were a race of intelligent, bipedal, organic beings that comprised much of civilized society on Spherus Magna (including Bara Magna and Bota Magna). They were relatively small in stature, being smaller than other races such as Glatorian and Skrall; however, they were generally more populous than the other races. Like many living things on Spherus Magna, Agori had mechanical implants integrated into their bodies and were covered in armor, although their bodies still consisted mostly of organic tissue underneath. Before the Shattering, Agori society was overseen by the Great Beings and organized into several different elemental tribes. After the Shattering, on Bara Magna, many Agori lived in villages that competed for the desert's scarce resources through the Glatorian system.

The rock tribe formed the largest population of settled Agori on Bara Magna, followed by the fire tribe in Vulcanus. Some believed the sand tribe may have been the largest, but their nomadic and hostile nature made it impossible to get an accurate count of their number.1

The Agori had a saying, "Sometimes the tallest mountain is the first to crumble," which could have been said of the Vorox's regression into savagery after the Shattering.3

The Agori, or villagers, of the world of Bara Magna were a tough, independent breed. In a place where every day was a struggle to survive, they learned to use what they had around and rely on their wits.4

In most cases, Agori tribes had leaders that were also Agori.5

In the Agori language, the word agori meant "villager."6

There was not a very large number of Agori on Bara Magna. With such limited resources, the villages could not support thousands of Agori; there just was not enough food and water.7

Physical characteristics in Agori were generally the same across tribes; however, they did vary from individual to individual.8