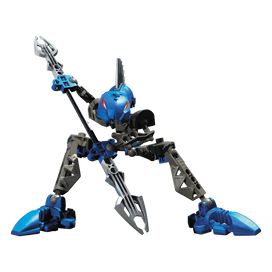 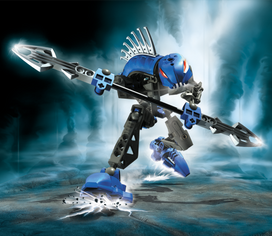 Guurahk was one of the six Rahkshi sent by Makuta to stop the Herald and recover the Avohkii. Its staff emitted a powerful cone of energy capable of disintegrating anything it struck. It had a special talent for determining the weakest point in any object or opponent and exploiting it.1

Guurahk was able to reduce the mightiest stone to mere fragments. No weakness could be hidden from the eyes of Guurahk. He could instantly analyze any obstacle, find a weak spot, and then use his Staff of Power to make the obstacle crack and collapse.2

Guurahk's color was blue, and its type was disintegrator. Its Staff of Power released a cone-shaped energy wave that made an object crumble to dust. Guurahk would spend hours observing an enemy before striking. He analyzed every strength and weakness of his foe before he acted.3

Guurahk was the Disintegrator-Rahkshi. Its disintegrator beam had the power to crack any structure.4