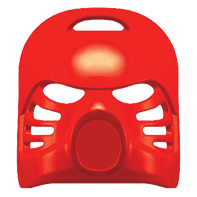 The Kanohi Hau was the Great Mask of Shielding. The mask created a force field around the user, protecting him or her from physical attack. Its sole limitation was that it could only protect against attacks that were expected, so it was ineffective against ambushes.1

The Hau was the Great Mask of Shielding. It provided protection against any attack the user was aware of, but not against ambush.2

The Kanohi Hau was the Great Mask of Shielding. It protected its user against attacks but had no effect against ambushes.3

If a being kept the Hau's shield up, it would protect them from ambushes. Hau users didn't tend to do this because of the mental strain involved in maintaining the shield.4

Hau were created from Kanoka disks with the growth and regeneration powers.5, 6

The Hau could protect its user from gas or fire attacks.8

Affecting the air within the Hau's defensive bubble would arguably not be considered a physical attack.9

The Hau protects users, but does not prevent them from firing projectiles through the shield. However, a user would likely not be able to maintain the intense level of concentration required to keep the shield up and fire a projectile at the same time.10

The Noble Hau produced a weaker shield which did not last as long as the Great Hau's shield.11