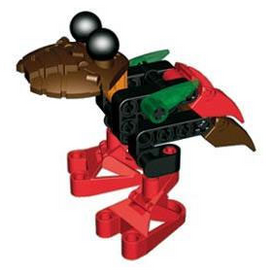 Infernavika were a breed of small bird Rahi. They lived near the molten protodermis waste pipes on the coast of Ta-Metru. Their love of ultra-hot places kept them safe, as few other creatures ventured near.1, 2 Infernavika later migrated to Mata Nui and made a home amid the lava near Ta-Koro.2

This tiny bird made its home among the molten lava near Ta-Koro. Living in the midst of lava helped the infernavika survive, as there were few predators that would venture too near an active volcano.3