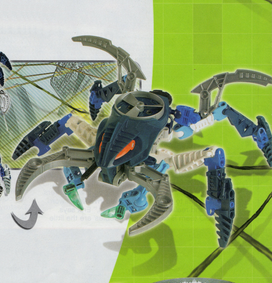 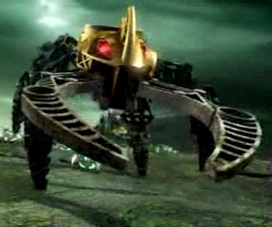 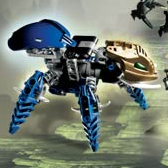 Kahgarak were a powerful species of Rahi related to the Visorak and used as guards by the Visorak hordes. Kahgarak ranged in height from 6 to 12 feet and in width from 9 feet to 18 feet. Their coloring also varied. The Kahgarak's Rhotuka spinners had the power to envelop a foe in a zone of shadow. The target would be unable to see or communicate with the outside world and would remain trapped until another Kahgarak opened a gap in the zone.1 This power meant that only Kahgarak could release the dreaded Zivon from its domain of darkness or send it back there.1, 2 They were sometimes fitted with projectile launchers for use in sieges.1

Kahgarak [the combiner model kind] served as lieutenants to Roodaka and Sidorak, leaders of the horde. Kahgarak spinners could cloak an opponent in a field of shadow which moved with them wherever they went. To an outsider, it appeared as if the Kahgarak's enemy had simply been swallowed by shadows and disappeared.3

Kahgarak were used as sentries for sites of vital importance to the Visorak; for lesser sites, gate guardians might be used.4

Kahgarak were an extremely powerful type of Visorak spider, ranging in size from 6 feet tall and 9 feet wide to 12 feet tall and 18 feet wide. They came in different sizes and colors, although they all had the same foul disposition. They served as lieutenants for Roodaka and Sidorak, guarding vital spots or leading parts of the horde on hunts.5

The Rhotuka spinners of a Kahgarak could cloak an opponent in a field of shadow which moved with them wherever they went. While the target could survive in the dark field, he could not hear or see anything beyond it or communicate with anyone outside it. To the outside, it appeared as if the target had simply been swallowed by shadows and disappeared. Kahgarak also had the ability to use their spinners to open a gap in the Zone of Shadow, allowing the Zivon to emerge. Kahgarak were the only thing able to send the Zivon back there, preventing the horde from being wiped out by the Zivon's appetite. Some Kahgarak were also fitted with projectile launchers for use in sieges.5

During the Visorak invasion of Metru Nui, Kahgarak guarded the Coliseum and could be found city-wide.5

Iruini once suggested targeting Kahgarak after they summoned the Zivon, making it impossible for the Visorak to get rid of the monster. The Rahaga rejected the idea because the Zivon would devastate everything in sight if let loose.5

Kahgarak could not make paralysis spinners.7

Kahgarak were not mutated Visorak.8

Kahgarak did not usually make webs.9

There was no inherent conflict between Kahgarak and Visorak.10

Kahgarak didn't always have blue in their color schemes.11

Kahgarak did not produce Visorak venom.12

Kahgarak Rhotuka were the only way to reach the Zone of Darkness.13