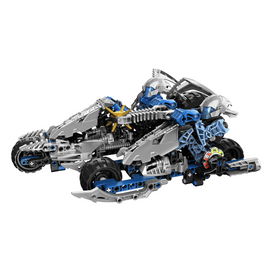 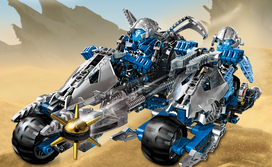 The Kaxium V3 was a powerful cycle equipped with a sidecar. The Kaxium V3 played a crucial role for Tajun in the Core War. With enemy armies all around and vast expanses of desert to cover, the water tribe needed a vehicle that could be used for rapid scouting. They adapted a courier vehicle, the Kaxium V2, adding weaponry and thin armor, and named it the Kaxium V3. Designed more for speed than for power, the Kaxium still managed to win more than its share of matches in the arena. Its major asset was maneuverability. Other arena vehicles simply could not stop or turn fast enough to keep up with the cycle. While they were trying to get into position, Thornax launched from the Kaxium had damaged the opposing vehicle. The Kaxium V3's main cycle and sidecar could operate independently of each other. The drivers would often split the two in combat to confuse opponents. The main weapon on the Kaxium was a mounted Thornax launcher. Explosive Thornax were almost always used in vehicle matches. The wide tires allowed the Kaxium to handle well on sand dunes. Scodonius had outrun mounted bone hunters in it more than once. Unlike many vehicles on Bara Magna, the Kaxium was actually created before the Core War and used by water tribe couriers. The Kaxium V3 was the fastest of the vehicles used in arena matches, but it also carried the least armor, making it more vulnerable to damage.1

Scodonius and Kirbraz, two Agori of the water tribe, were best known as the drivers of the Kaxium V3. Their success in the arena had led to both of them becoming arrogant, and neither was very popular in other villages.2

The Kaxium was faster than the Thornatus V9. The Thornatus lost to the Kaxium in the previous year's tournament, but Perditus spent several months afterwards practicing maneuvers to counter the cycle.4

Kirbraz was the main pilot, and Scodonius drove the sidecar.5