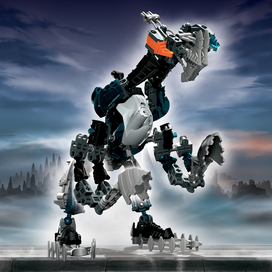 The Kraawa was a Rahi with the special ability to absorb any force directed against it and use that energy to grow. The Kraawa was kept in the most secure portion of the Metru Nui Archives. It was unknown how many specimens existed.1

At first glance, this Rahi, the Kraawa, did not seem particularly frightening or dangerous. Yet it was held in the most secure section of the Onu-Metru Archives, and any and all contact with it was strictly forbidden. Apparently, its defense against predators was the ability to absorb any force used against it and use that energy to grow. Matoran were unsure whether any other specimens of this species existed, but they sincerely hoped they did not.2

The Kraawa did not seem particularly dangerous, but it was kept in the most highly secured portion of the Archives. Its defense against predators was to absorb any force directed against it and use that energy to grow. The specimen kept in stasis grew to half the size of a Knowledge Tower and wrecked three levels of the Archives before it was subdued. Whether others of its kind existed somewhere remained a mystery.3

The Kraawa was one of the most bizarre creatures contained in the Onu-Metru Archives. Only one specimen was ever seen in Metru Nui, and it was kept in the most secure section of the Archives prior to the Great Cataclysm. Matoran researchers were fascinated by its unusual abilities but never pierced the mystery surrounding the creature. At first glance, the Kraawa did not seem particularly frightening or dangerous. With a squat body and a long neck, it moved with a shuffling, lumbering gait that looked quite comical. It had two glowing eyes which changed color from blue to red when it was in a stressful environment. The Kraawa's primary means of defense seemed to be the ability to absorb any force used against it and convert the energy of the attack into physical growth. The more it was struck, the bigger and stronger it got. It was unknown if there was any upper limit to its growth potential. The Kraawa was a difficult captive of the Archives, frequently escaping and wreaking havoc on the facility.4

After the Great Cataclysm, the Kraawa kept in the Archives was on the loose in Metru Nui, and the Rahaga and Toa Hordika did not know where it was. Rahaga Pouks wondered if the Visorak had already captured it and often mulled over the problem of how to trap it without ever striking it.4