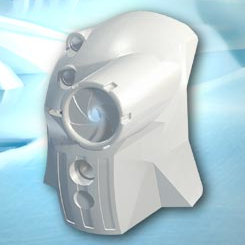 The Matatu was the Noble Mask of Telekinesis. It allowed the user to move objects and project force by thought.2

The Kanohi Matatu was the Noble Mask of Telekinesis. It allowed its wearer to move objects using the power of his thoughts.3

Matatu were created from Kanoka disks with the teleport and shrink powers.4

The great Matatu that Nuju wore was fitted with a telescoping eye. This was a mechanical enhancement that allowed the user to see better, since vision was important to how the mask was used, even though the mask power had nothing to do with vision as such.5

If a Matoran with a powerless Matatu with no eyepiece became a Toa, their Great Matatu would not have an eyepiece.6

A Noble Matatu user could lift more than one object, but they would have to be lighter and for a shorter time because the duration of the Noble Mask's power was shorter.9