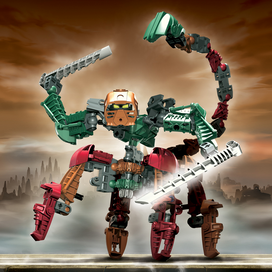 The Kralhi was the initial attempt to create an order-enforcing machine in Metru Nui. It was designed by Nuparu under orders from Turaga Dume and constructed in Po-Metru.1, 2

This creature, the Kralhi, might have resembled a Rahi, but in fact it was purely robotic. It was the early design prototype for the Metru Nui order enforcement squads, and perhaps two dozen of them were built. Its tail launched an energy bubble which could completely enclose an offender. The prototype then drained energy from its captive into itself, leaving the lawbreaker too weak to cause trouble for some time. They were eventually "retired" in favor of the more efficient Vahki, but these beings refused to be shut off and were believed to be hiding in some of the less-frequented sections of the Archives.3

The Kralhi was the prototype for the Vahki. Based on an idea conceived in Ko-Metru, the Kralhi could launch an energy bubble from its tail to enclose a target. The Kralhi then drained the energy from its captive into itself, leaving the lawbreaker to weak to cause trouble. Unfortunately, it also left the Matoran too weak to work, which made the Kralhi an inefficient solution to the problem. They were retired, but efforts to shut them off failed. As of story year 2004, about two dozen were still at large, a few in Ko-Metru and a few in little-used parts of the Archives. The whereabouts of the rest were unknown.4

The Kralhi was able to launch an energy bubble from its tail at a target. The bubble would envelop its target and drain a percentage of one's energy. This system proved inefficient, as it left Matoran lawbreakers too weak to work. Dume decided to have the Kralhi retired, but the machines refused to be shut off. Some hid in Ko-Metru, some in the Archives, and others in the tunnels connecting Metru Nui to Mata Nui. The last group allied with Mavrah against the Toa Metru and were destroyed as a consequence. The Vahki replaced the Kralhi in Metru Nui.1