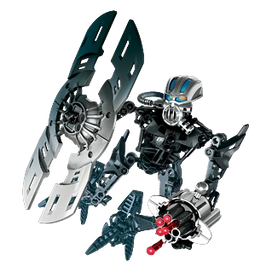 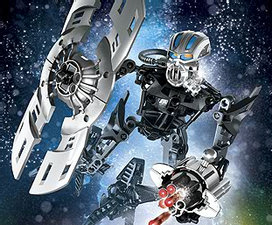 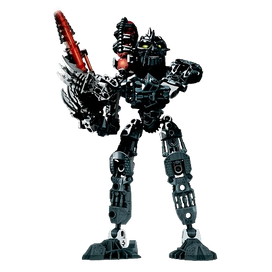 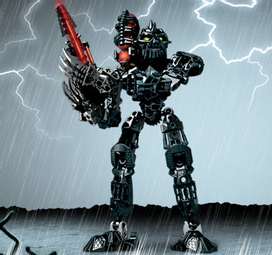 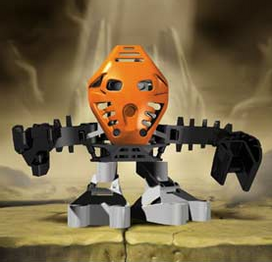 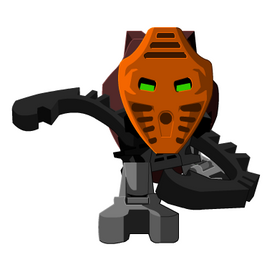 Nuparu was an Onu-Matoran1 and later a Toa Inika and Toa Mahri.2, 3

As a Matoran, Nuparu's color was orange. He invented the Boxor, a vehicle used against the Bohrok swarms. He was always observing, learning, and planning new inventions.4

Nuparu was an Onu-Matoran from Onu-Metru. On Metru Nui, he wore an orange Pakari with silver markings, his torso was black, and his feet were dark gray. He worked as a receiving official for the Rahi Receiving Dept. at the Receiving area outside the archives.5

On Metru Nui, Whenua did not know Nuparu well. When other workers in the Archives were busy among the exhibits, Nuparu was off on his own tinkering. He was always trying to figure out how Gukko birds flew, how the great Muaka cat could stretch its neck to lunge at prey, and other questions that might seem trivial to others.6

On Metru Nui, Nuparu had a workshop in Onu-Metru. He was an inventive, brilliant Matoran who was always putting things together and taking them apart. He came up with the design for the Vahki, helped create the Le-Metru airships, and had made many other contributions to daily life. As of mid-story year 2004, his next big project was to come up with some kind of device or vehicle that would help Matoran defend themselves against Rahi and other threats.7

Toa Nuparu's element was earth. His mask was the Kanohi Kadin, the Mask of Flight. His weapons were a zamor sphere launcher and laser drill. Nuparu was a master inventor, always looking for ways to improve the Toa's equipment or build something new.8

Nuparu was the aerial scout for the Toa Inika.9

Toa Mahri Nuparu's equipment was an aqua blaster blade, a shield, and a Cordak blaster. His mask was the Kanohi Volitak, the Mask of Stealth. The Toa of Earth could use the Barraki's best tool – their ability to sneak up on a foe – against them with his Mask of Stealth. Almost impossible to see or hear, he struck from the shadows to save the universe. Nuparu had way too much fun practicing with his Cordak blaster.10

On Metru Nui, Nuparu was employed as a Rahi Receiving Official in the Onu-Metru Archives. However, he could not suppress a natural talent for invention and engineering. His curiosity sometimes led him into dangerous situations.2

On Mata Nui, Nuparu was best known for inventing the Boxor.2

Nuparu greatly regretted not being able to see an Exo-Toa in person, as he would have loved to have studied its design and possibly reproduced it in some form.2

Nuparu loved to learn. Being a Toa allowed him to see places and encounter things he never would have been able to as a Matoran. He showed himself to be both quick-witted and extremely brave to the point that even Kongu showed respect for him. He would occasionally become too much the scientist and get distracted by the wonders around him, although being in the hostile underwater environment tempered this.2

As a Matoran and a Toa, one thing stayed the same for Nuparu: he loved to learn. To him, being a Toa meant more chances to see places and do things he never would have had the chance to do in his former life. At times, he became so fascinated by some new Rahi or new location that he would forget what he was supposed to be doing. Nuparu showed himself to be a brave and resourceful Toa. Once Nuparu mastered the power of the Mask of Flight with help from Kongu, he made an excellent scout for the team. Despite some early tension, even Kongu eventually came to respect Nuparu. Nuparu showed that success as a Toa had less to do with that power one possessed, but being quick-witted enough to know how to use it. As the Toa Inika of Earth, Nuparu wore the Kanohi Kadin, the Mask of Flight, and carried a zamor sphere launcher and a laser drill.12

As a Toa Mahri, Nuparu wore the Kanohi Volitak, the Mask of Stealth, and carried a Cordak blaster and a shield.13

The claws Nuparu had as an Inika were likely his hands.15

Nuparu Inika's claws were part of his hands, not tools.16, 17

Nuparu was generally pretty easy going. He was a very dedicated Matoran and took being a Toa very seriously.19