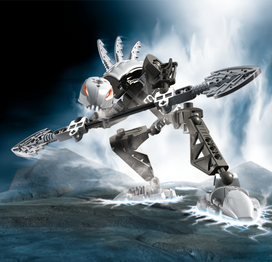 Kurahk was one of the six Rahkshi sent by Makuta to stop the Herald and recover the Avohkii. Its power, directed through its staff, caused its targets to grow enraged and often to turn on each other.1

Kurahk's power made friends turn on each other. This Rahkshi filled the hearts of his opponents with anger, making allies become enemies. The angrier Kurahk became, the more his sheer power increased.2

Kurahk's color was white, and its type was anger. Its Staff of Power sent anger energy at an opponent, making the target angry at everyone around him, even friends. Kurahk was always in a rage and often acted recklessly. It was possible that his anger actually increased his powers. Makuta hoped that Kurahk would destroy the unity of the Toa Nuva by turning them against one another.3

Kurahk was the Rahkshi of Anger, and its Staff of Anger fired energy which could cause the target to be consumed by rage.5