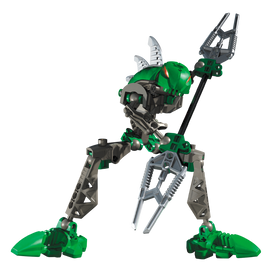 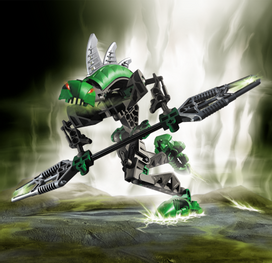 Lerahk was one of the six Rahkshi sent by Makuta to stop the Herald and recover the Avohkii. Its staff was capable of poisoning anything it touched, from the ground to other beings.1

Lerahk's power poisoned all it touched. Lerahk's power was toxic. Whatever his Staff of Power touched became poisoned. Even the ground turned sickly green, and plants withered away before the might of this Rahkshi. Lerahk was a patient seeker, willing to wait for hours for the perfect moment to act.2

Lerahk's color was green, and its type was poison. Its Staff of Power poisoned anything it touched. Just by touching the ground, it could make plants wither away and die. Lerahk was strong, fast, and cunning, but he was not the most intelligent of the Rahkshi. He could not use his Staff of Power at long range; the staff actually needed to touch its target.3

Lerahk was the Poison-Rahkshi. Its stinger full of deadly poison would sicken anything it contacted.4

Lerahk was the Rahkshi of Poison, and its Staff of Poison could infect anything with a toxin, from plants to soil to living beings. The Lerahk actually needed to touch its target for the poison to be effective.5

Lerahk could control his power to the point that he could choose whether his poison would kill someone or just make him very sick.6