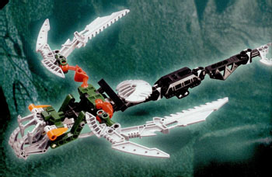 Lohrak were winged serpent Rahi found throughout Metru Nui and some portions of Mata Nui. The Lohrak was known for its sharp teeth and scaly hide covered in slime. Commonly found underground, they attacked in a swarm and were considered a dangerous menace, particularly by Onu-Matoran miners. For a time, they were even pronounced a protected species by Turaga Dume in the hopes of stopping digging projects that might unearth more of the monsters.1

Lohrak were vicious winged serpents that lurked underground in Metru Nui. Their bat-like wings allowed them to fly extremely fast, and their rows of razor-sharp teeth made them a menace to all.2

Lohrak made a hissing sound. They were hideous, winged serpents that could fly. Their huge, powerful mouths were filled with row upon row of gleaming, needlelike teeth. Lohrak were known, and feared, throughout Metru Nui. First discovered by Onu-Metru miners years before story year 2004, the creatures had spread all over the city. They were as territorial and aggressive as they were slimy and disgusting. Dwellers in darkness, they had proved to be a particular problem for archivists and maintenance workers. Still, every metru had Matoran who could share a frightening story of a Lohrak encounter. Workers who wandered off the job to go exploring were warned that Lohrak might lurk anywhere. For a time, the creatures were even pronounced a protected species by Turaga Dume, in hopes of stopping digging projects that might unearth more of the monsters.3

After their initial discovery by miners in Onu-Metru, Lohrak could be found all over Metru Nui. Lohrak were great, winged serpents with ragged jaws full of snapping teeth. Their scaly hides were often covered in slime and other disgusting filth. They were a terrifying sight and had aggressive, savage behavior. Lohrak attacked in mobs, swarming all over their prey until they brought it down by sheer weight of numbers. Lohrak dwelled in darkness. They proved to be a particular problem for the archivists and maintenance workers in Onu-Metru, although every metru had Matoran who could share a frightening story of a Lohrak encounter. Workers who wandered off the job to go exploring were warned that Lohrak might be lurking anywhere. For a time, Turaga Dume even pronounced them a protected species in the hopes of stopping digging projects which might unearth more of the monsters.4

During the Visorak invasion in Metru Nui, the Lohrak seemed to become a pet project of the Visorak. Mutated Lohrak were three to five times normal size, and one was enough to cause significant damage. Norik suggested that the best way to deal with them was to impede their flight somehow, since they were much slower on the ground. It was possible that the Visorak were planning to mutate and enslave Lohrak for use in future conquests.4

Kalmah once mentioned that lohrak (the original species) lived in the southern lands.5

At some point, Chirox struggled to develop a flying serpent with just the right amount of exterior slime to allow it to slither through small crevices, while not so much that it left a trail. Knowing this, Mutran developed a version of his own and named it the Lohrak to spite him.6