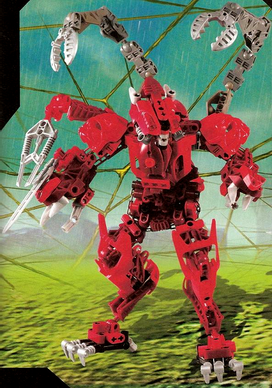 Lurker was a Dark Hunter.1 He was banished from his home island for the crime of murder and accepted the offer to join the Dark Hunters. Modifications left him with claws, stingers, and built-in blades. He was a natural fighter and climber with a well-honed survival instinct.2

Lurker, as he was code-named, was banished from his island for the crime of murder. Rather than strike back at his former neighbors, he struck out on his own. He survived on his own for years, which honed his natural skills as a hunter and fighter. He accepted any job he could get, some of which would have otherwise gone to Dark Hunters. Not wanting the competition, the Shadowed One recruited him into the Dark Hunters. When given an option as to what type of improvements he would receive, Lurker rejected weapons in favor of more basic equipment: stingers, blades, and claws. Additionally, he had two Kanohi mounted on his shoulders to look like trophies of combat. Lurker was already agile and strong, and his clawed arms made him an excellent climber. Toa learned to look to the sky, just in case Lurker should drop down on them. Lurker was a natural hunter and fighter, with skills honed by years of surviving on his own. His new tools made it impossible for an opponent to know just where the next attack would come from.3

As of story year 2006, Lurker's status was unknown. He had been sent to investigate rumors that Makuta had been killed by Toa and had yet to return.3