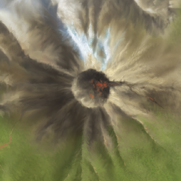 The Mangai Volcano was the great volcano of Mata Nui. As of mid-story year 2007, molten lava still flowed from this site, feeding the lava farms of Ta-Wahi.1

Streams of lava (molten protodermis) flowed from the Mangai Volcano.2

The Mangai Volcano was located in Ta-Wahi.3

The Mangai, located in Ta-Wahi, was the great volcano of Mata Nui. As was later discovered, the lava coming out of the volcano was actually molten protodermis from Ta-Metru in Metru Nui.4

Tha Mangai volcano had a great hole leading down to Metru Nui. The hole existed before the Great Cataclysm, but not the volcano.5, 6