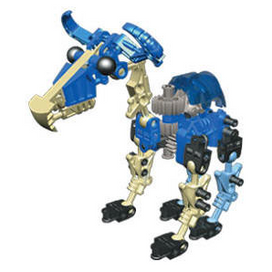 The Mata Nui Cow was a placid animal that lived in herds on the plains of Mata Nui. Although peaceful by nature, it was quick to react to danger. Opponents would be wise to beware the Mukau's horns and hooves, which it could wield with surprising speed.1, 2

The Mata Nui Cow was originally called the "Mukau" in its debut in the LEGO Magazine, apparently as a play on the words "moo cow."1 However, Bob Thompson disliked this name (likely for being too silly), so it was later renamed the Mata Nui Cow on the LEGO Club Buildit website and never referred to by the name "Mukau" again.3, 4