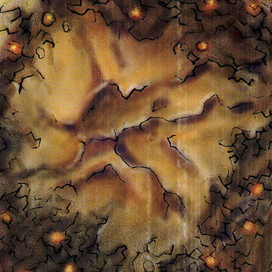 The Mountain was a sentient rock formation in the center of the island of Xia. Members of the Vortixx species climbed the Mountain in pairs as a rite of passage, a task made extremely dangerous by the fact that the Mountain could sense their presence and would try to consume them.1 It was the dominant central landmark of Xia.2

The residents of Xia simply called this peak "the Mountain." The Mountain dominated Xia's landscape. Forges, factories, warehouses, and docks covered every bit of available space around the Mountain. It was said that clean air could be found at the top of the Mountain, although this served as more of a tease than a refuge from the pollution below.3

The Mountain looked just like any other natural landmark. However, the Mountain was sentient, in that it was able to feel, if not think or plan. It could tell when Vortixx were climbing its slopes, and it responded by attempting to consume them. When this happened, great crevices would suddenly appear in the rock face to claim a victim.3

Climbing the Mountain was a rite of passage for the Vortixx.4