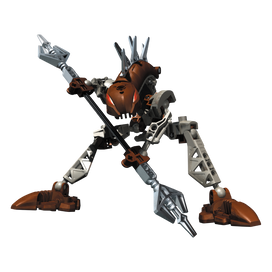 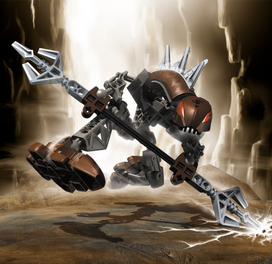 Panrahk was one of the six Rahkshi sent by Makuta to stop the Herald and recover the Avohkii. It was able to use its staff to make any object fly into fragments. Its energies were so potent that small explosions would go off wherever it walked.1

Panrahk's Staff of Power caused objects to shatter. One could always tell when Panrahk was drawing near – the ground blew up beneath his feet in a series of tiny explosions. His amazing Staff of Power could easily shatter any substance.2

Panrahk's color was brown, and its type was fragmenter. Its Staff of Power made any object fly into tiny fragments. It had lightning-fast reflexes. The only warning of his approach was that the ground beneath his feet blew up in a series of tiny explosions when he walked.3

Panrahk was the Fragmenter-Rahkshi. The arc of its dark energy would cause anything in its path to explode into pieces.4

Panrahk was the Rahkshi of Fragmentation, and its Staff of Fragmentation could cause objects to explode with great force or send explosive energy beams through the air.5