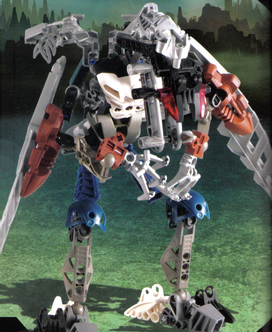 Poison was a Dark Hunter1 able to spit a paralyzing venom at his enemies.2 He bore a special hatred for Matoran, since they hunted his species to near extinction. Interestingly, his only vulnerability was to his own venom.2

Poison, as he was code-named, was not very intelligent, although he had his uses to the Dark Hunters. Because Matoran were responsible for hunting his species to near extinction, Poison had a ferocious hatred for Matoran. He also exhibited unquestioning loyalty to the Shadowed One. Poison's primary offensive weapon was a poison which coursed through his body. Strangely, Poison's only real vulnerability was to his own venom. Biologically, the Shadowed One's researchers were unsure how this was possible. The fact that getting the poison required getting it from Poison's body made it difficult to exploit this weakness. Poison was able to spit a paralyzing venom at his foes. It was inevitably fatal if left untreated for more than half an hour. Poison was also able to deliver a powerful stun with his tail.3

As a Dark Hunter, Poison's resemblance to pure Rahi caused most Toa to overlook him, not realizing that he was a semi-intelligent Dark Hunter.3

Poison likely injected his venom through his claws.4