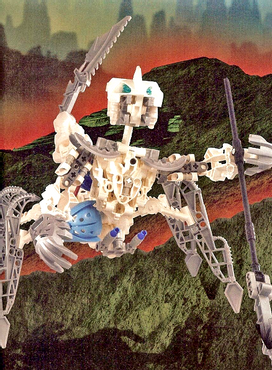 Primal was a Dark Hunter1 who relied on strength and speed to complete his missions. He had a paralysis device which he used only in emergencies. Primal belonged to a species largely wiped out by the Visorak. He proved to be a difficult operative due to his refusal to accept missions which did not involve the possibility of getting a trophy from the hunt.2

Primal, as he was code-named, was a warrior from a savage tribe whose land was overrun by the Visorak. He successfully led a small band of survivors in battle against the Visorak long enough to come to the attention of the Dark Hunters. The Shadowed One recruited all of the warriors in the band, then betrayed the position of the rest to the Visorak to tie up loose ends.3

The Shadowed One considered Primal to be almost more trouble than he was worth: too annoying to keep employed, but too efficient to kill. From the start, Primal proved to be difficult. He refused any biomechanical implants, accepting only a small paralysis device implanted under his skin. He collected trophies from his hunts. After a short time, he started refusing to take missions which did not hold the promise of a good trophy. In addition, his fierce sense of justice occasionally led him to hunt one of the Dark Hunters' clients rather than the assigned target. The Shadowed One tolerated him because he was extremely effective, but he was willing to eliminate him if he tired of his eccentricities.3

Primal used his paralysis device only as a last resort. He preferred to rely on strength, speed, an uncanny knowledge of tactics, and his trusty spear. Primal was one of the few Dark Hunters who operated solely on his own. He objected to the attitudes and behaviors of many of the other Dark Hunters, and he tended to express his displeasure with his spear.3

Primal's paralysis implant allowed him to paralyze opponents by making physical contact with them.4