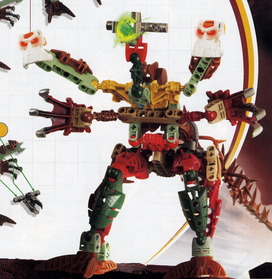 Protodites were microscopic Rahi which were accidentally freed in the Archives and still infested some sections as of story year 2005.1 These creatures were being studied by archivists when a Kraawa attempting to escape rocked their container and shattered it. The protodites spread rapidly, kept in check by their sole predator, the Archives mole. It was unknown if protodites ever came to Mata Nui. A unique feature of the protodite was that physical impact caused it to split into two protodites of equal size and strength.2

Protodites were one of many creatures in the lower levels of the Archives which the Onu-Matoran could never identify. They were microscopic creatures which escaped their containment cell long before mid-story year 2004 and were on the loose in the Archives ever since.3

Protodites were the preferred prey of Archives moles.1

The judgement cannon was a Xian weapon powered by a specifically bred race of protodites which lived inside of it. The protodites produced a certain type of mental energy which the cannon amplified and focused into a constant stream. The weapon could be used to destroy an enemy's will to continue fighting or reinforce an ally's resolve to keep fighting.4

Protodites were capable of moving through microscopic openings.5

Protodites were not inherently dangerous.6

Protodites were susceptible to being crushed, burned, or frozen.7

Protodites were microscopic creatures that could be found virtually anywhere.8

Protodites could split like protodax provided they were intact. The problem was, at their size, they were very easy to destroy with a single blow, so only individuals that felt an impact and survived would split.9